Answers to the informal quiz, Part 2: The Moon

Back with more answers to the informal quiz...this time: mysteries of our Moon.
The most common mistake here is that the phases are caused by Earth's shadow falling on the surface of the Moon, thus producing the "dark" part. It turns out moon phases have nothing to do with Earth's shadow at all. If it did, then the moon would always have to be "behind" Earth (on the other side of the Earth from the Sun) in order for Earth to cast its shadow there. The only time you see Earth's shadow on the Moon is during a lunar eclipse. 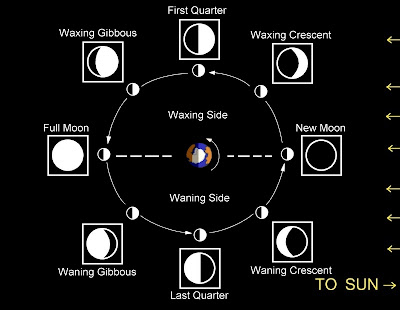 In the above diagram, we're looking top-down on the Moon-Earth system - that's meant to be the North Pole in the middle of the Earth figure (thought to be more accurate I should've put less ice). From this perspective, everything moves counter-clockwise: the Earth's rotation, and the Moon's motion in its orbit around the Earth. Sunlight is streaming in from the right, illuminating the right side of the Earth. Note that as the Moon moves round the Earth, its right side always stays illuminated. The pictures in each of the boxes are the phases we would see on Earth for each of the positions of the Moon in its orbit, based only on what percentage and which side of the Moon's lit surface we can see.
I asked this one just to highlight that the moon does not produce its own light. Rather, we only see it because it reflects sunlight.

That said, I've received some answers that the "Moon is made of very reflective stuff". Turns out that isn't actually true, it's quite dark. Its "albedo" - in other words, what percentage of incoming light it reflects - is only round 11%. That's roughly the same reflectivity as a blackboard.

Its surface is made of relatively unweathered basaltic lava. If you've every seen a relatively fresh lava field, you know it's pretty dark stuff. I've promised Stephanie I'll do a follow-up on this one once all the answers are up...
Absolutely! Some people are still amazed by this when they see the moon in the clear blue daytime sky.

As shown in the diagram for the moon phases, a good chunk of the Moon's orbit takes it quite close to the Sun from Earth's perspective, which would mean seeing it in the daytime sky near the Sun. The caveat here is that the phases seen around that part of the orbit only show a very small percentage of the Moon's illuminated half. You can't actually "see" a New Moon, since none of the illuminated half is visible from Earth...but once it gets into a part of its orbit to produce a decent-sized crescent, seeing it in the daytime sky is no problem.
Okay, so I put this one here because I actually got into a heated argument with my 5th grade science teacher, who absolutely insisted the Moon does not rotate. Just for the record, I was right.

If you watch carefully over time, you'll notice the Moon always keeps the same face pointed towards us. I'm not talking about the illuminated half here, but the actual surface topography - we always see the side with the "man-in-the-moon" image (just illuminated from different angles). Many people use this as justification for why the Moon does not rotate. However, the Moon is also orbiting us. If you picture the geometry in your head, in order for it
to always keep the same face pointed towards us, it must rotate at the exact same rate as it orbits. In other words, it orbits once every 27.3 days, and it rotates once every 27.3 days.

Now, is this just a coincidence? No, not at all. I promised Chris I'll do a follow-up on this question, too.
The common wrong answer here is that the atmosphere magnifies the image of the Moon, a theory also espoused by my 5th grade science teacher (how they let this person teach science, I'll never know). This is not correct...in fact, it slightly shortens the image in the vertical direction.

The reason is solely a matter of perspective. The diameter of the Moon spans roughly 1/2 of a degree of angular size in the sky, no matter whether it's on the horizon or over your head. We don't realize how large 1/2 degree is when the Moon is overhead because there are no terrestrial objects in our immediate vision for comparison. Only when it's on the horizon do we have a basis for comparison to everyday objects like trees and buildings.

If you don't believe this explanation, measure it! Hold your pinky finger at arm's length when the moon is on the horizon and note its comparative size. Then, later, try this again when it's overhead...you'll find it's the same.
Yes, there is! As seen in this video which I posted before, things fall on the surface of the moon, albeit with only 1/6 the gravitational force found at the surface of the Earth. I've had many students who somehow acquire the incorrect notion that no atmosphere means no gravity. For an amusing anecdote related to this misconception, read this.
Posted by Planetary Astronomer Mike at 6:09 AM 7 comments: