Okay, folks, sorry for the languishing blog, but it's been a heck of a semester. Meanwhile, on with the show!

What's the history of our solar system's asteroid belt? There seems to be a consensus that it's inevitable that another Cretaceous-ending-like asteroid will hit the Earth again someday; do such asteroids typically come from the asteroid belt?

First, a little background: The main asteroid belt is a collection of random rocky debris found in the large gap between Mars and Jupiter. Here's a nice plot from the Minor Planet Center, the organization responsible for tracking and naming the objects. The four inner turquoise circles are the orbits of the four inner planets (Mercury, Venus, Earth, and Mars), and the outer turquoise circle is the orbit of Jupiter. Within the sizable gap between these, each green point is an asteroid in the main belt.

While there's a lot of individual objects known - literally millions - their total mass isn't much. In fact, Earth's moon is roughly 25 times the mass of the entire asteroid belt combined.

There's been a lot of speculation that the asteroid belt comprises the remains of a "failed planet" which couldn't form in our early solar system due to Jupiter's strong gravitational pull constantly rending apart any protoplanets. This may be true, but the jury is still out - it is compelling that there's such a large gap between inner and outer planets, and that there's such a large gravitational force nearby. On the other hand, there obviously wasn't a whole lot of mass to work with in this region (though Jupiter likely stole a good deal of it during its own formation). Moreover, current models suggest that Jupiter may not have even formed in its current location, but actually migrated.

Either way, Jupiter continues to exert a strong gravitational effect on the main asteroid belt today...enter the concept of "Kirkwood Gaps". Now, in the above plot from the Minor Planet Center you'll notice little order in the position of the asteroids locations at a given time.

However, if we plot their *average* distance from the Sun (their so-called "semi-major axis") versus how many are at that distance, something very different happens: 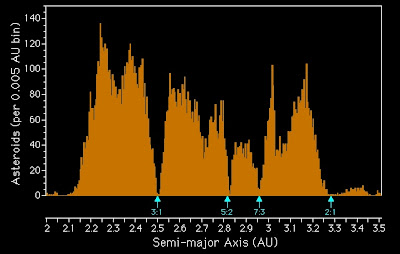 They seem to be grouped into families at specific distances, with no-mans-land in between - our Kirkwood gaps.

More interestingly, an object's average distance from the sun is directly proportional to the time it takes to complete one orbit. Those little numbers at the bottom of each Kirkwood gap (3:1, 5:2, 7:3, and 2:1) correspond with the number of orbits the asteroid makes in a given time versus the number of orbits Jupiter makes. This is what's known as an "orbital resonance". A similar phenomenon occurs with particles in the rings of Saturn in resonance with Saturn's moons, as well as Kuiper Belt objects in resonance with Neptune.

It's a bit like being a little kid on a swing while a big kid keeps pushing you over and over in the same place...eventually, you'll fall out and go flying off. Similarly, asteroids that wander into a Kirkwood Gap due to random interactions won't stay in that gap for long, and Jupiter will send them off on some fairly random orbit. There's good evidence to suggest that many of the asteroids which cross Earth's orbit (i.e. the ones we really need to watch out for), experienced this fate.

So, the answer is a pretty strong yes to this question - a good deal of potentially hazardous impactors probably started out in the main asteroid belt, accidentally wandered into a Kirkwood gap due to mutual asteroid interactions, and were sent hurtling into the inner solar system by Jupiter. Since the nature of this process is inherently chaotic, it's extraordinarily difficult to predict which main belt asteroids this will happen to and which subsequent orbit they'll end up on...but statistically we can say that another major impact is really more a matter of "when" than "if".
Posted by Planetary Astronomer Mike at 10:37 AM