Follow-up: When stars are not where they appear

There have been some good comments and email from the last post, so I wanted to cover one other case of when star are not when they appear, as well as an interesting consequence.

In the comments of the last post, Naurgul asks:

Wait, I thought another factor was that gravitational forces distort the course of the light. Doesn't that play a role in this?

I understand that light bends as it passes a strong gravitational field.
With this in mind, is anything where it seems to be in the Universe?

Both good points. Let's delve into the phenomenon of "gravitational lensing".

Einstein's theory of relativity says that mass doesn't just create a force of gravity, but actually bends the fabric of space and time. A good way to think about this is a bowling ball sitting in the middle of a mattress...the weight of the ball will put a dimple in the surface of the mattress.

Now, if I'm an ant trying to travel the shortest path from one side of the mattress to the other, it may actually be faster for me to take a curved path around the bowling ball than to travel a straight one.

Similarly, a large mass will put a dimple in the surface of space-time. Even though light has no mass (and thus won't be affected by the force of gravity), it will be affected by this dimple. Light always travels on the shortest possible path - known as a "geodesic" - so in a curved space-time this will often be a curved path. 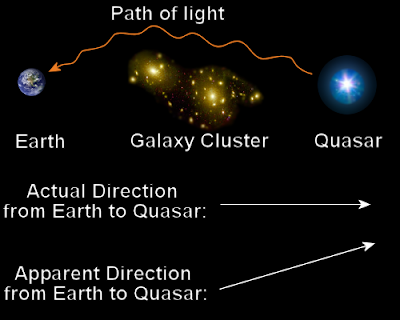 We have a distant quasar which lies directly behind a galaxy cluster as seen from Earth. Light traveling from the quasar which is initially *not* on a path towards Earth can actually get bent by the curved space-time surrounding the cluster and start heading towards Earth. As a result, the image of the quasar will be shifted - it won't appear directly behind the cluster, but above it.

In some cases, multiple paths might be the shortest, in which case we'll actually see multiple images of the quasar. Here's an example, known as Einstein's Cross, where we see four images of a quasar bent around a galaxy at the center. If the lensing object is perfectly aligned with the background object, we'll actually see the background object's light as a perfect ring around the lensing object.

Note this probably doesn't apply to the prior post's example of Arcturus, since the light needs to pass fairly close to a pretty large mass to be considerably lensed; the smaller the mass, the closer it needs to pass. In general, this won't happen for nearby stars.

That's not to say that gravitational lensing isn't used in our own galaxy, though. Astronomers have actually searched for rogue planets wandering through our galaxy with this technique. Normally such a galactic wanderer would be far too dim to see in any telescope. However, if the rogue planet just happens to perfectly pass in front of a background star, we'll see the star undergo a characteristic brightening due to being lensed into that perfect ring. So far we've caught quite a few of these events.

Okay, so there's one more interesting interaction I want to mention between gravity, light, and position: the Poynting-Robertson effect.

Remember from the last post, even our Sun doesn't appear exactly where it is due to the aberration of light. Since we're moving around it, incoming light seems to come from a point slightly ahead of us.

We'd expect the same effect for the Sun's gravity particles/waves (or whatever it is that mediates the gravitational force)...but it turns out this isn't the case. If we carefully work out the relativity equations, we find that the amount of aberration of gravity is perfectly canceled by the amount space-time is bent by our Sun. It turns out this is quite a good thing, since if there were an aberration of gravity, no orbits would be stable. 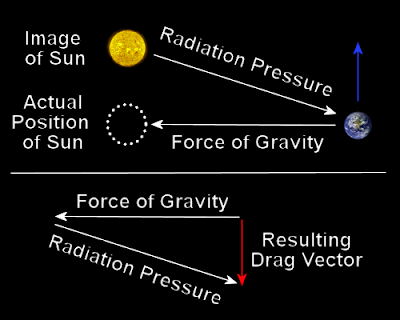 In the top half of the diagram, we have Earth merrily moving around its orbit...its direction of motion is indicated by the blue arrow. The gravitational force from the actual location of the Sun (indicated by the dotted circle) exerts a force inwards on the Earth, keeping our planet on its happy orbital path. The image of the Sun (indicated by an actual Sun image), slightly shifted from its true position, is also exerting a force outwards: radiation pressure.

I've greatly exaggerated the magnitude of the radiation pressure force for clarity - it's nowhere near as strong as the gravitational force - but it's there, nonetheless. Now, if radiation pressure outwards were coming from the exact same location as the gravitational force inwards, they would balance and the only effect would be that the Sun's gravity would be slightly lessened and Earth would travel slightly slower in its orbit.

However, this is not the case. From the bottom half of the diagram, we see that when we combine the two forces, there's a leftover component (the red arrow) which is in the opposite direction of the Earth's motion. This ends up acting like a drag force on orbiting objects, slowing them down.

Now, don't panic just yet. For planet-sized objects like our Earth, radiation pressure is truly negligible compared to gravity. Gravity is a function of the mass of the planet, while radiation pressure is a function of the surface area of the planet - how much surface can absorb incoming light. For objects with a large surface area-to-mass ratio, though, this becomes important.

Okay, so what do I mean by surface-to-mass ratio?

If we keep making objects smaller, by the time we get to grains of dust the surface area-to-mass ratio is big enough that radiation pressure is significant compared to the gravitational force. Grains of dust which are in orbit will keep feeling this drag force, continuously slowing them down and making their orbits tighter and tighter. Eventually, they'll spiral all the way in to the surface of the star and be consumed.

For this reason, whenever we observe a dust ring around a star, we know that the star must be very young. Anything more than, say, a million years (a tiny amount of time for a star), and the dust ring would've already spiraled in.
Posted by Planetary Astronomer Mike at 8:23 AM