When stars are not where they appear...

Excellent question. So, there are two reasons why we don't see a star or astronomical object where it *actually* is:

First, we'll tackle the first reason, since it's a little easier. Let's say you go outside tonight and observe Arcturus, a nice, very bright orange giant star. Now, Arcturus happens to be 36 light-years away (roughly 200 trillion miles). That means the light that you see tonight has been traveling for the past 36 years towards Earth. It left the surface of the star back in 1973, when Nixon was president, and disco was still awesome.

Now, since that time, Arcturus itself has actually been moving around the center of our galaxy - what astronomers call "proper motion". In thirty-six years, it would've moved about 1/40th of a degree on the sky (an angular distance just barely discernible to the naked-eye). However, you wouldn't see at its current location, you'd see it where it was back in 1973. Depending on whether you learn better from images than text, a diagram might be helpful here: 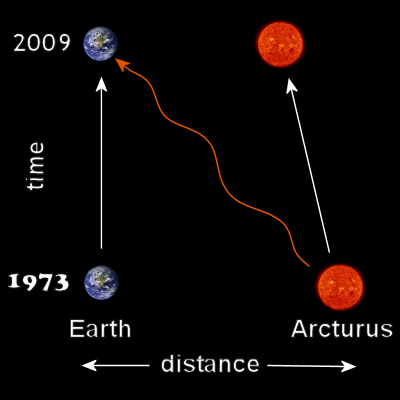 In the above figure, the vertical axis is time, and the horizontal axis is the distance between Earth and Arcturus. The orange squiggly arrow is the light emitted by Arcturus back in 1973, which, traveling at the speed of light, hits Earth in 2009. Notice that Arcturus moved between 1973 and 2009...but here on Earth we don't know anything about it since we're only currently receiving light from 1973. (For simplicity, I assumed that Earth isn't moving.)

Basically, we have no information about the state of Arcturus since 1973. For all we know, Arcturus could've gone supernova in 1980 (unlikely, but hypothetically speaking....) and we wouldn't know until 2016.

(Historical side note: I specifically chose Arcturus for this example because it was the first star discovered to have proper motion. In the 1600's, Edmund Halley - of Halley's comet fame - was perusing the 1500-year-old star charts of Ptolemy, and noticed Arcturus was not in the same position. The only logical conclusion was that Arcturus had moved over the eons.)

So, that's the first reason why stars are not where they appear. Now for the second, slightly more complex reason: Earth *is* moving.

Let's imagine for a moment that we're sitting in a car in a rainstorm. There's no wind, so the rain is falling straight down, presumably from a storm cloud directly above us. For some reason, we've decided to strap a bucket to the top of our car to collect rainwater...maybe we just really love the flavor of it. Whatever the reason, though, if we point the bucket straight up, we'll collect the most water.

Now, let's say we start driving really fast. It turns out that pointing the bucket straight up is not the best way to collect water - we're better off tipping it slightly in the direction of our motion. This is because if the bucket is angled it's easier for the rain to clear the the bucket's front lip and make it down to the bottom. So long as it gets inside the bucket before the back lip passes over it, it'll be collected...the following diagram of two moving buckets might help:

Notice the straight bucket produces a "rain shadow" at its front lip. Also notice the tilted bucket managed to catch some rain a moment earlier that's now covered by the back lip, but will still fall all the way to the bottom.

Now, from our perspective moving in the car, things are different. There's more rain hitting our front windshield than our back window, so we figure that rain isn't coming straight down, but at an angle. To us, our tilted bucket strategy works better because it appears the rain is coming in at an angle from a storm cloud that's both above us as well as a little ahead of us...this is the vital piece of the analogy. Again, another diagram might help: 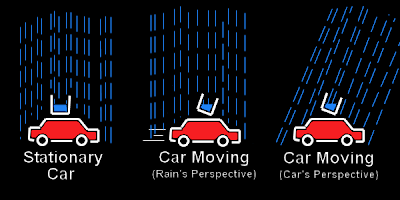 So, instead of thinking about storm clouds, rain, buckets, and cars, let's rephrase this in terms of stars, light, telescopes, and the Earth.

If the Earth were holding still, the light from a star would come from the star's true direction (at least at the time the star emitted it). Because we're moving, though, it appears that the light comes in at slight angle from a source slightly ahead of us - just like with the rain - so we see the star as slightly ahead of us. This phenomenon is known as the "aberration of light".

Since Earth is moving around the Sun, even the Sun itself is shifted from where it "actually" is located by about 1/200th of a degree. It's not enough to notice with the naked-eye, but telescopes can easily pick up that shift.
Posted by Planetary Astronomer Mike at 8:24 AM