Okay, one week has passed, and I've been getting lots of feedback from the informal quiz. Since there's quite a few questions, I'll post the answers in parts, starting with the question about Earth. In addition to the correct solutions, I'll also post the most common mistakes. Without further ado, then, here are the answers many have been eagerly awaiting...

By far the most common mistake here involves distance. Many people believe Earth is closer to the Sun in summer than in winter, thus making it hotter or colder, respectively.

The real answer here involves the Earth's "axial tilt". The axis about which the Earth rotates is at a constant tilt of 23.5 degrees. This means at certain times of the year, the Northern Hemisphere is more directly facing the Sun, while 6 months later when the Earth is on the other side of the Sun, the Southern Hemisphere is more directly facing the Sun. Note the diagram: 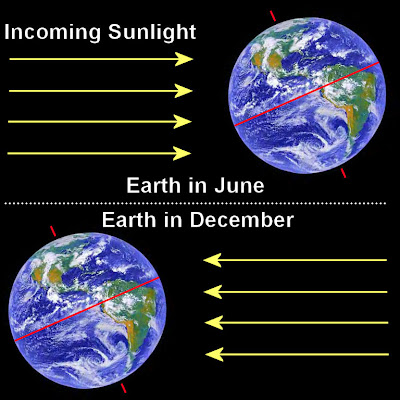 Another common "almost right, but not quite" answer I've heard several times involves the tilt, but in the wrong way. Those folks maintain that because the Earth is tilted, one hemisphere is closer to the Sun than the other. However, this effect is minuscule, since the tilt only accounts for a difference in distance to the Sun of a couple thousand kilometers, while the average distance to the Sun is 150 million kilometers. Again, seasons have nothing to do with distance, it's all about angles.

This one is relatively easy. The Earth rotates about its axis every 24 hours, bringing the Sun into view for half of that time period.

(Now, technically, the Earth makes a full 360 degree rotation in only 23 hours, 56 minutes...but because the Earth has also traveled about 1 degree in its orbit around the Sun during that time, the Earth must rotate an extra 1 degree to bring the Sun back to the same relative position. Thus, the 4 extra minutes.)

Most folks get this one, but there are still some who maintain that the Earth doesn't rotate at all, and just orbits once around the Sun per day. Woe is them.

In spite of being a question asked by every 5-year-old in existence, this is without doubt the most frequently incorrect answer.

I've gotten simply wrong responses such as "the sky is simply reflecting the ocean". In the middle of a continent far from any ocean, though, the sky is still blue. I've also gotten the "almost correct" response that the atmosphere is refracting the sunlight. It does involve the atmosphere interacting with sunlight, which is good...but still not quite right.

The correct answer here has to do with scattering, specifically - "Rayleigh scattering". When light has a wavelength close to the size of a gas molecule it's passing near, there's a good chance the light will essentially "bounce" off the molecule and start heading in a different direction.

So, imagine incoming sunlight coming from the Sun and passing through our atmosphere. Remember, the sun emits every colors of the rainbow, it's just that when the colors are all combined, they appear to us as white light. Now, the red light is more likely to make it through unhindered, while the blue light gets scattered everywhere and appears to an observer on the ground to be originating from a direction other than the Sun. Hopefully this diagram will help explain the concept: 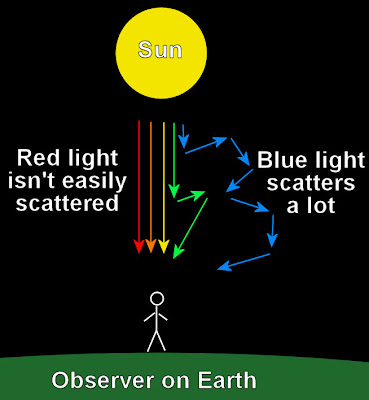 This also explains why our sun appears slightly more yellow than it would from space. Some of the blue gets scattered out of our line of sight towards the Sun.

The "blue sky" answer above also explains this question. At sunset (and sunrise), sunlight has to pass through far more atmosphere to make it to an observer on the ground, vastly increasing the chances of scattering even the not-so-blue light. Only the very reddest light makes it to the observer without getting scattered...thus, a red sunset.

So, this is meant as just an open-ended question...I only ask as there seem to be quite a few folks who think that Earth is the largest planet.

Within our own Solar System, planets can be divided into two groups - the inner, terrestrial rocky planets (Mercury, Venus, Earth, and Mars) and the outer gas giant planets (Jupiter, Saturn, Uranus, and Neptune). Earth is the largest of the inner rocky planets, but many times smaller than the outer gas giants. So, it could be said to fit somewhere in the middle, albeit slightly on the smaller side.

On the other hand, if you take the ~300 planets known around other stars, Earth is quite dwarfed. Just about all of these "extrasolar" planets are massive gas giants - many larger than Jupiter - and most of which are found orbiting incredibly close to their parent star. Within that population, Earth is no more than a puny wet rock.

Of course it's quite likely that this known collection of extrasolar planets are not representative of the population of planets as whole. The problem is that our observing techniques for detecting these distant worlds are severely biased towards only detecting very large planets which orbit very close to their parent star. The hope is that with improving technology, we'll start detecting Earth-like planets in a matter of a few years, particularly with space-based missions such as Kepler.

The common mistaken belief here is to think that because the bowling ball is heavier, it falls faster.

It turns out that the only thing which slows down the feather is increased air resistance. In essence, it has a much lower terminal velocity than the bowling ball. (Terminal velocity is the fastest a given object of a given shape can fall - it's the speed at which the Earth's gravitational acceleration is perfectly balanced by the force exerted by air friction.)

Take away the air, and everything - no matter its weight - falls at the same rate. Check out this video from one of the Apollo moon landings - you'll see that in the absence of any air, a hammer and a feather fall at exactly the same rate.

Now, technically the bowling ball, with a larger mass, feels a stronger gravitational force. However, because it has a larger mass, it's inertia is also greater...in other words, you need more force to get it going. It turns out that its increased gravitational force perfectly balances its increased inertia, resulting in all things falling at the same rate (in a vacuum).
Posted by Planetary Astronomer Mike at 8:33 AM