My 10-year old daughter asked me what a neutron star was a couple of days ago. From what I understand, a neutron star is one possible outcome of the death of a star. At least, that is what I always thought. When I tried to explain to her what a neutron star was and how it came to be, I mangled in explanation and probably left her more confused and than anything. I'm sure I also shook her faith in the idea that "daddy knows everything." :). Anyway, how can I explain a neutron star to a curious and intelligent 10 year old girl?

Well, you're right - neutron stars are one possible outcome of a star in its death throes. Among the fascinating menagerie of astronomical objects, they're a curious case.

There are generally three possible results produced when a star runs out of fuel for fusion at its core: usually a white dwarf, rarely a neutron star, and in exceptional cases...a black hole. It's all entirely dependent on how massive the star was to begin with.

It's a bit difficult to consider neutron stars outside of the whole context of a star's life, so let's think about the internal processes of a star. First, it's important to realize that a star is in constant balance - gravitational pressure squeezing it smaller, and internal energy generation pushing it outwards. Only a small deviation from this balance would cause a star to very quickly undergo catastrophic collapse or explosion in a matter of minutes.

Now, normal "main sequence" stars happily shine away, undergoing fusion at their core. The mechanism is different depending on their mass (and thus their internal pressure), but the general result is the same: they convert 4 hydrogen atoms into a single helium atom.
Eventually, however, a star will run out of hydrogen at its core to fuse, with only a lump of inert helium "ash" left over from all that fusion. As the reaction can no longer proceed at the center of the core, fusion of hydrogen will then begin in a shell surrounding this helium by-product. As the fusion now proceeds in a layer a bit closer to the star's surface, the outer layers of the star will balloon outwards, and the whole star becomes what we term a "red giant" - a star much, much larger than our own Sun, but very cool at the surface due to that expansion (well, cool for a star, anyway).

This "shell-burning", too, will begin to consume all the hydrogen fuel available to it. With only gravitational pressure, the star is out of balance and will begin to collapse...but before it does so, all that increased pressure will suddenly cause the inert helium at its core to ignite. Fusion will begin again, but in a different manner, with 3 helium atoms fusing into carbon (or possibly 4 helium atoms fusing into oxygen, depending on internal conditions).

The process continues in this way for some time, with the material at the core and then the shell fusing its way up the periodic table. Inert carbon/oxygen ash will build up at the core and helium shell-burning will start. At some point the carbon/oxygen ash will ignite to start fusing into silicon or sulfur. This process continues until carbon/oxygen ash shell-burning begins, and eventually even the silicon/sulfur ash will ignite to star fusing into iron. The result is an onion-skin layering of the star's interior, with iron at the center, a surrounding shell of silicon/sulfur, a shell around that of carbon/oxygen, a shell around that of helium, and a surrounding envelope of hydrogen. 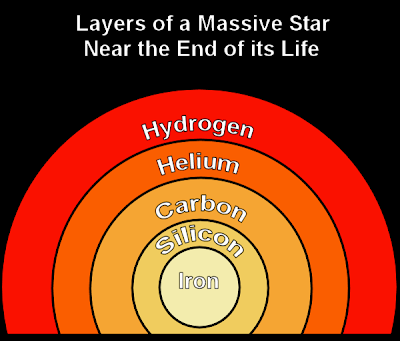 The above image shows a simplified model of the interior of star with the onion-layer structure (with some elements removed for clarity). Just how far it can get up the periodic table depends strongly on a star's mass - only the most massive stars will have the full onion-layer structure I outlined above. Smaller stars such as our Sun might only get to the helium fusion stage...there's simply not enough mass to gravitationally squeeze the core enough to undergo carbon/oxygen fusion. Very small stars may not even be able to start fusing helium.

Additionally, the speed at which all these processes occur depends sensitively on their mass, with huge stars using up their fuel quite quickly (a few million years), while very small stars can burn for 100 billion years. It's a bit similar to celebrities - superstars like Britney Spears shine brightly but quickly burn out, while minor stars such as Foghat are still touring to this day.

Now, this process cannot continue ad infinitum...iron is the limit. This is simply because any fusion reaction of atoms iron-sized or larger is actually *endothermic*. It doesn't give off energy as all the previous reactions do, but actually requires energy to continue. As a result, there's no longer any internal energy to push outwards against gravity's compression inwards, and the star begins to collapse.

What happens at this stage is also highly mass dependent. For stars about 5 times the mass of our Sun or smaller, it's more "out with a whimper" than "out with a bang". The core of the star is first to collapse and as it shrinks it begins to heat up. This causes a gentle radiation "wind" which pushes the outer layers gracefully away from the star. The outer layers form what is known as a "planetary nebula". (It has no actual relation to planets, it was simply named that because early observers though it bore a resemblance to a planet's image in a telescope.)

The core itself will squeeze down as small as it possibly can. The laws of quantum physics state that there's only so tight that you can pack mass before all the electron orbitals are essentially touching one another with no room to pack any more in. This state - known as "electron degenerate matter" - is precisely what happens. The result is an incredibly dense, former stellar core roughly the size of the Earth made of this exotic degenerate matter, known as a "white dwarf". It no longer generates its own energy, but it is quite hot - one can think of it a bit like a dying ember from a former campfire. The electron degeneracy pressure keeps it from collapsing further. 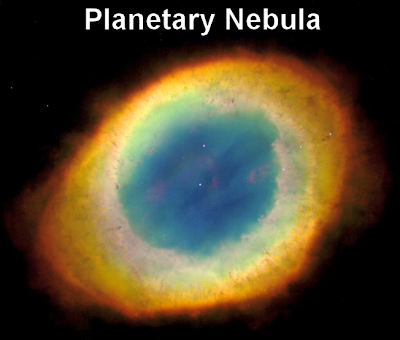 The above image is a photo of the Ring Nebula, a planetary nebula which demonstrates what will happen to our own Sun in roughly 7 billion years. The tiny dot at the very center is the white dwarf.

If, on the other hand, the star is larger than roughly 5 times the mass of our Sun, something quite different happens. The exact process is still debated, but the general thought is that as the core collapses, somehow shock waves are set up throughout the outer layers and a violent explosion ensues - a supernova. It is also in this process that all elements heavier than iron are fused. Only a supernova has enough energy to contribute to these heavier-than-iron endothermic fusion processes.

Meanwhile, something very odd happens in the core itself. If the core is more massive than roughly 1.4 times the Sun's mass - a critical threshold known as the Chandrasekhar limit - then there's enough gravitational compression that even electron degeneracy pressure cannot prevent it from collapsing further. There's enough pressure that every proton in the core begins pairing off with an electron in the core, and the two combine to form a single neutron while emitting a few neutrinos. With a mass of at least 1.4 solar masses, there are countless protons and electrons, resulting in a wave of even more neutrinos...one theory is that this wave of innumerable neutrinos actually causes the violent explosion of a supernova.

The result is a compact stellar remnant made almost entirely of neutrons - a "neutron star". As with the electrons in a white dwarf, they too are packed as close as quantum physics will allow, forming "neutron degenerate matter". Instead of forming an object approximately 10,000 kilometers across in the case of a white dwarf, a neutron star is a mere 10 kilometers across. Packing a sun's mass into an object the size of a city makes neutron star unimaginably dense. I believe the oft-repeated figure is that a teaspoon of neutron star material would weigh roughly as much as an aircraft carrier. Whoa. 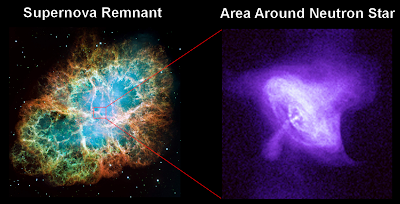 In the above image, we see two photos of the Crab nebula, a supernova which occurred in 1054 A.D. The image on the left we see the outer layers blown off from the explosion in visible light. The image on the right shows the area around the central neutron star as seen in X-rays. The neutron star is strongly affecting the hot gases surrounding it. This is because in the process of collapsing down from a Sun-sized object to a city-sized object, two interesting things happen:

- Magnetic field lines which were once sparse are also compressed together. The result is an object with a magnetic field billions of times greater than Earth's.

- Angular momentum must be conserved. Just as a spinning ice skater who pulls her arms in begins spinning faster, a Sun-sized object spinning once a month which collapses down to a city-sized object will speed up to spin on the order of many times a second.

These strong magnetic field lines will spin with the neutron star, sweeping out a circle a bit like a lighthouse. If they're oriented properly towards our line of sight, we'll see a radio pulse many times a second...such a properly-oriented neutron star is known as a pulsar. The Crab Nebula above is host to the Crab Pulsar. Spinning 30 times a second, we receive radio waves from it at the same frequency.

Now, if the conditions during a neutron star's formation are just right, a dynamo effect can be set up which will not simply squeeze the magnetic field lines together, but actually greatly amplify them. This results in an object with a magnetic field thousands of times greater than an average neutron star - such an object is known as a "magnetar". Again, I believe the oft-quoted figure is that a magnetar at the distance of the moon could pull the car keys out of your pocket.

What the stellar remnant then becomes is also debated. It was the general idea that simply nothing could fight against such a strong gravitational force, and the object would collapse to a singularity - a black hole. Recently, some astronomers have theorized the existence of one more intermediate state: quark stars. Quarks are the elementary particles from which protons and neutrons are made. Just as electron degeneracy and neutron degeneracy can prevent further collapse, it's possible that quark degeneracy could act similarly. So far, though, no one has ever seen such a quark star - they're simply on the theoretical drawing board at this point.
Posted by Planetary Astronomer Mike at 9:15 AM